The device of the mixer for the kitchen: video instructions for installation with your own hands, how it works, price, photo

First of all, a kitchen mixer should be practical and convenient. To which the valve taps for sinks, familiar to us since Soviet times, did not correspond a little.

After all, it is important not only how the kitchen faucet works and how durable it is, but also how it meets the requirements of ease of use. Valve mixers consisted, in fact, of two taps. More precisely, the correct name is valve-type mixers. If you remain an adherent of the usual plumbing equipment and are going to install in a new kitchen set on the sink such a device, remember its correct name by type, and also be aware of the principle of operation by examining the internal structure of the kitchen mixer. 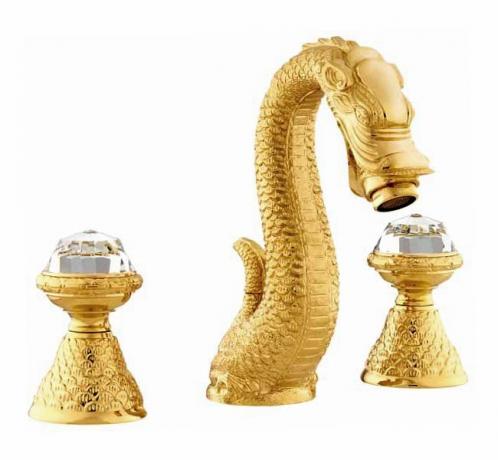 This type of plumbing equipment is either with a tee or with nozzles that are connected separately to the cold water and hot water pipes. 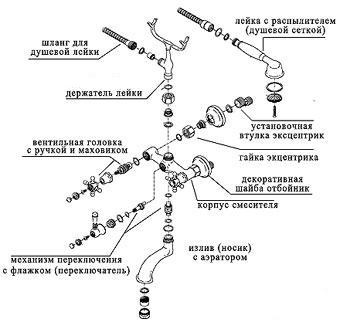 The inconvenience of using this type of mixer is the need to turn the stem by rotating the handwheel. In this case, the threaded feed forces the stem inside the kitchen faucetsealing the water inlet tightly with a rubber or paronite gasket.

There are two disadvantages in this case:

Additionally, however, crane axle boxes are also available with ceramic plates instead of rubber gaskets, so the first point can be excluded.
But the inconvenience does not go away from this ...

It is these trump cards that distinguish single-lever modern devices, which today have entered everyday life thoroughly and firmly. That is, the reliability remains, as well as valve ones with ceramic plates, and the need to wield fingers to open water disappears.

You can simply put a jet into the sink, wielding a ladle held in your hand, wrist, elbow, back brushes... In some devices it is allowed to regulate the water temperature with the simplest movements of the lever right left. This is indicated by the instructions for use. 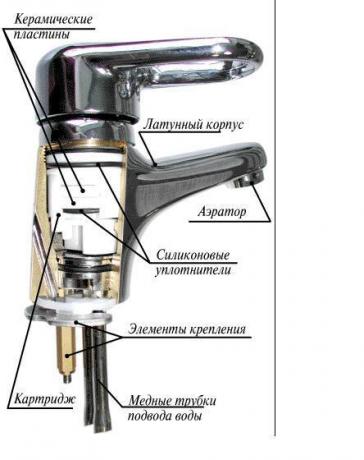 Advice!
In some (frequent) cases, the device of a kitchen mixer released at a bargain price by unscrupulous manufacturers, provides for the need to "catch" the temperature for a long time and carefully, moving the flywheel not only in the horizontal plane, but also up down.
It is better not to skimp on expensive options, here the price determines the practicality, including.

There are two types:

Despite the fact that initially many housewives avoided purchasing them, explaining their rejection by inconvenience and unusualness, today literally every second kitchen is provided with just such devices. Most women realized that it is possible to turn on the water when their hands are in soap and dirt with just one touch.

This will never be possible with two-valve mixers, where the pressure and temperature level of the water have to be regulated for a long time. Moreover, in some cases, this must be done exclusively with both hands.

After this approach, not only the dishes are subject to washing, but also the device itself. Equally important, it is very difficult to thoroughly rinse each valve, especially if it is ribbed or has a different complex shape.

The simplicity and ease of use of kitchen faucets with one joystick have won over thousands of women. And among the male bachelor class of consumers with fish-smelling hands (on weekends, of course), this is simply the bestseller!

The device is more reliable in design than valve versions with mandatory threaded stem feed. Practice shows that a lever mixer has to be repaired much less frequently than its outdated counterpart in water supply.

You can watch an educational video about the work or repair of this type of plumbing equipment at our site - for those who do not lend themselves to the division of labor and prefer to do everything in the house yourself. 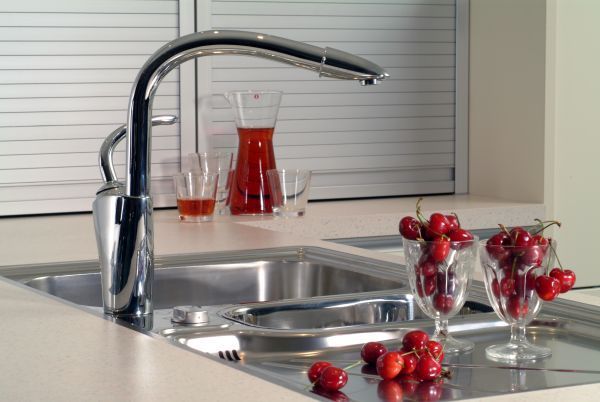 In addition, many modern kitchens are equipped with the latest technology. This can be a decisive factor for interior decoration and plumbing selection, especially for modern high-tech kitchen interiors and the like.

Metal sinks or even stone surfaces that look modern and technologically advanced will look ridiculous in combination with an old and somewhat rustic outwardly device. The premise of just one such detail can lose all its gloss and presentability.

You can make the valve design high-tech and ultra-modern, of course. But at the same time, in fairness, it should be noted that the majority of manufacturers whose names are trustworthy have practically stopped producing two-valve devices.

Important!
That is why, purchasing such a device, one does not have to wait for high quality and long years of service.
An alloy of silumin and other components, which will instantly disable the mixer, can significantly spoil the quality of the water.
Also a criterion, in between cases. 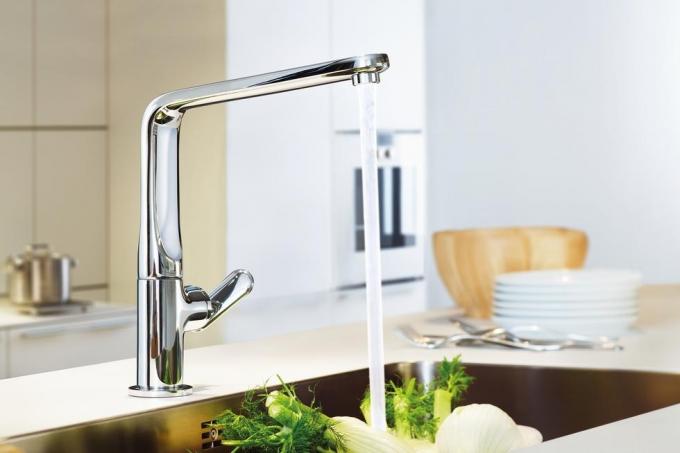 Two-valve mixers are equipped with crane-axles, which appear on sale less and less, and it turns out to be more and more difficult to choose the required type. Moreover, since such devices on the market are more and more often initially not quite high-quality and reliable, replacing the working "insides" in them will turn out to be a fantasy task. In most cases, the body instantly bursts or deforms.

Another indisputable advantage of kitchen faucets with one joystick over devices with two levers is economy. Everyone knows that adjusting the pressure and temperature of the water with valves will take some time.

During this time, a huge amount of useful fluid flows away. However, it turns out to be impossible to spend it with benefit, since it is either icy or like boiling water. Also, hands soiled during cooking do not allow the container to be substituted.

With a device that can be opened with a movement of the elbow and used immediately, such problems are not terrible. The water will be immediately used for its intended purpose. Moreover, most of these mixers are equipped with a special device.

There are two levels of water consumption. One mode is called economical, the second type makes it possible to work at full capacity. It is very convenient and practical for those who monitor their fluid intake. 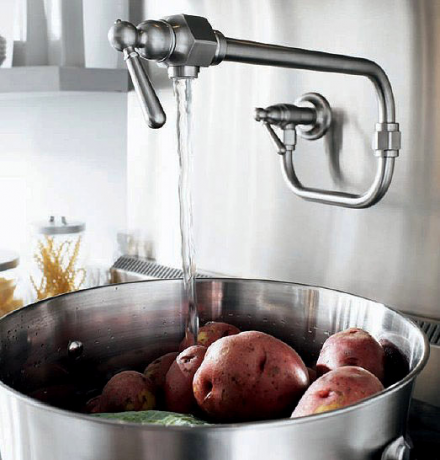 Many have already realized that the device of a kitchen faucet with a joystick is much more practical. Inside them, cartridges are used as consumables, which can be purchased at any plumbing store.

Moreover, it is not at all difficult to find them, knowing the brand and manufacturer of your device. It will also be much easier to replace them even without professional help. 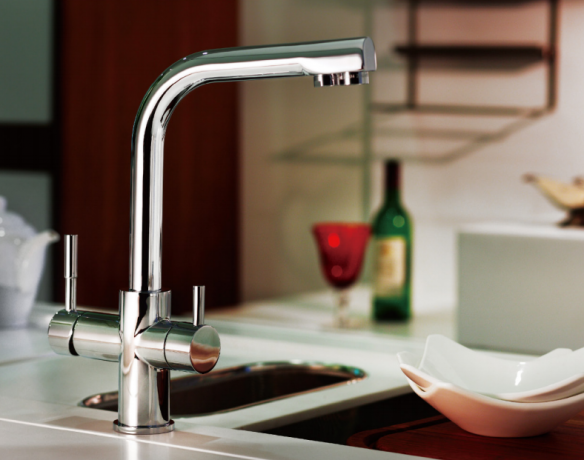 Content1 Which mixer to choose1.1 Don't forget when buying2 Installation and connection of a mixe... 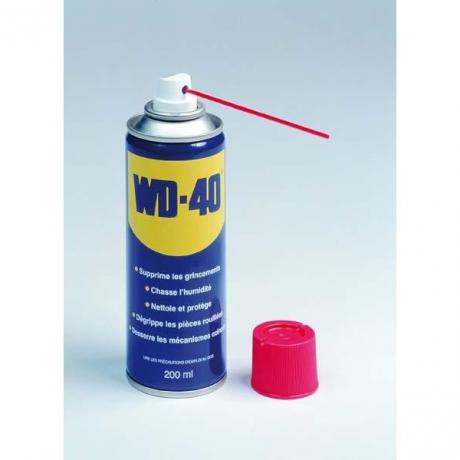 How to install a faucet in the kitchen: correctly connect, remove, put, repair, assemble, unscrew with your own hands, video instructions for installation, installation of a kitchen faucet, photo and price 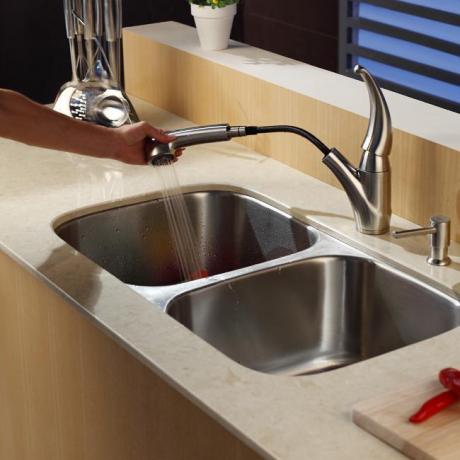 Content1 For any conditions and taste1.1 Characteristics, and from the place of work also1.2 Few ...