Three weddings of Marilyn Monroe: what went down the aisle the main blonde of Hollywood

Unlike her on-screen heroines, who have always found true love, in real life, Marilyn Monroe did not turn out so well. The famous Hollywood blonde married three times, but not a single marriage was happy. True, the actress always went down the aisle in amazing images. Novate.ru talks about Monroe's wedding dresses, which still inspire brides.

Marilyn Monroe was beautiful, witty, sophisticated and... famous. It is not surprising that she had a huge following. True, outside the spotlight, the nee Norma Jean was unhappy in love and in her 36 years she married three times. As a recognized style icon, Marilyn greatly influenced the wedding fashion of her time. What outfits did Monroe choose for the most important days of her life?

The first pancake is lumpy

The first husband of Norma was a guy from Los Angeles, James Dougherty. They met for only a few months and got married as soon as the girl was 16 years old. Perhaps this wedding did not take place, if not for the circumstances.


Norma's mother was often treated in psychiatric hospitals and the girl had to live for a long time in terrible conditions in shelters. Seeing how the baby was suffering, Grace McKee, a friend of her mother, decided to take the future Marilyn Monroe to her place and got temporary custody. However, the family idyll did not last long. After a few years, Grace decided to get married and move to West Virginia, but Norma could not leave California, and therefore became a hindrance to her adoptive mother. To prevent the girl from having to return to the orphanage, McKee proposed to James Dougherty, who lived next door, to marry Norma as soon as she turned 16. The man did not need to be persuaded for a long time - he was in love with Marilyn, and therefore happily proposed to her.

The solemn event took place on June 19, 1942. The wedding image of the bride fully corresponded to the fashion of the 40s: Norma wore a floor-length A-line dress with long sleeves. Lace inserts on the skirt served as a decoration. The look was completed by the short veil and retro hairstyle popular at the time. The image turned out to be quite modest, but even in this outfit, Monroe looked amazing.

From the outside it might seem that young people were made for each other, but in reality this marriage turned out to be sheer torture: “We rarely spoke with my husband. But not because they quarreled or were offended. We just had nothing to say to each other, ”the future actress admitted. After James joined the Marine Corps in 1943, the couple's relationship soured. Norma soon got bored and decided to get a job at a factory, where her job was to check the parachutes and check if the planes were ready for flight. Thanks to the pictures taken at work, the beautiful brunette was able to start a modeling career. Dougherty was not happy with this decision and this greatly influenced their future relationship. Later, he admitted that in their marriage everything was fine exactly as long as Norma depended on him. A modeling career allowed her to become independent, which led to a divorce, which was formalized in 1946.

Six years after divorcing Dougherty, Marilyn met Joe DiMaggio, a famous baseball player. The initiator of the first meeting was the athlete: he saw the pictures of the model and asked the photographer to arrange a date with her. Initially, Monroe was not happy with the idea, but agreed. Later, she never regretted her decision and admitted that Joe immediately conquered her. The 37-year-old ex-baseball player looked advantageous against the background of the young Dougherty - he respected Marilyn's opinion, her desire to succeed in her career, loved and protected her from all adversity. In addition, Joe was a part of those circles in which a novice model always dreamed of getting. The couple dated for two years before getting married.

At the wedding, Monroe appeared with a dainty chocolate-colored suit with a white ermine collar. Many were surprised by this choice, given that Nora's wardrobe consisted mainly of fitted silhouettes and dresses with a deep neckline. Most likely, the model wanted to please her husband, who most of all appreciated modesty and sophistication in girls. Interestingly, this outfit was not new and was not sewn specifically for the wedding day. Marilyn wore the same costume to her meeting with the King of Greece, which took place two months before the wedding.

READ ALSO: Why are buttons sewn on the left on women's clothes, and on the right on men's clothes?

Alas, the happiness was short-lived. The couple lived together for only nine months. Monroe said that her husband was jealous of her fans and was not delighted with his wife's desire to be in the spotlight, attend bright events, and meet new people. The conservative Joe preferred to spend time at home and this was a serious reason for falling out. It was rumored that they wanted to remarry in August 1962, but Marilyn died that month.

The union of beauty and mind

The third husband of the famous blonde was playwright Arthur Miller. Despite the fact that the man was under the close scrutiny of the FBI and everyone around persuaded Monroe not to mess with him, the actress acted in her own way. They got married on June 29, 1956 and were married for a record long time for Marilyn - 5 years.

Nora chose the dress for this wedding very carefully: an outfit just below the knee with gathered translucent sleeves combined glamor, femininity and elegance, and the fitted bodice emphasized all the advantages figures. Gloves and a playful veil are the finishing touches. The future spouses wanted the inscription "Now forever" to be engraved on their rings. However, even she could not save their marriage. In 1961, Miller and Monroe filed for divorce. In the documents, the reason for the separation was the dissimilarity of characters.

Also read What wedding dresses did Russian star brides choose for themselves in 2019? 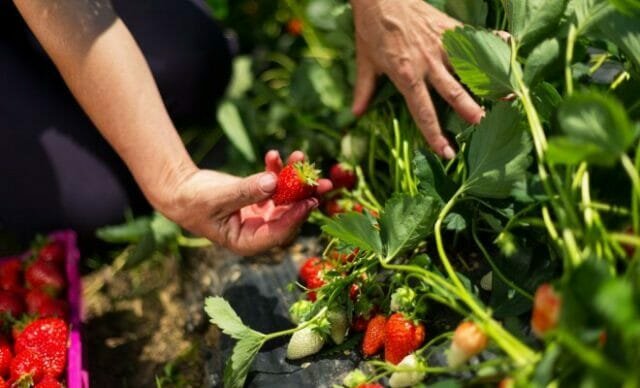 Feeding the strawberry summer during fruiting

If you decide to engage in the cultivation of strawberries, at first, you may have many questions...

Beets are one of the indispensable ingredients in the kitchen. Tinned, it will become the basis o...

No one is safe from being undeservedly under the scrutiny of the justice system. Once in such a s...