Have you noticed that the cucumbers turn yellow and / or curled at the edges of the leaves, and do not know how to deal with the problem and what caused it? There can be several - in most cases this is the result of improper care or breach of optimal growing conditions, sometimes malnutrition or disease. We understand the nuances together.

The lack of moisture

It goes without saying that constant dry air and lack of watering may lead to yellowing and drying of leaves of cucumber, which often begins with the edges of the leaf blades.

So that the plant does not dehydrate, in good weather can be watered cucumber in any way, but necessarily warm water (25-28 ° C) to evaporate excess moisture and the desired amount of water passed on favor of cucumbers:

With proper soil must be watered moderately moisturized not only on the surface but also in the depth of 10 cm.

Cucumber plants are usually noticeably react to other adverse growing conditions. For example, abrupt temperature changes can be cause yellowness at the edges of the leaves.

Such temperature jumps occur, e.g., during the return of frost, with protracted onset of precipitation or failure to comply with temperature and humidity in the greenhouse.

To avoid this, plants, especially young, it is necessary to establish stable temperature to keep the spring in greenhouses or in the shelter; and by cultivating cucumber in a greenhouse is necessary to carefully monitor the timely watering and ventilation.

The lack of macro- and trace elements in cucumber can also be shown on the plant the appearance of a drying light green-yellow border around the edges of the leaves. Unfortunately, one feature that is difficult to determine which element is missing cucumbers, need to look at complex picture, partly because so can manifest deficits and potassium, and magnesium, and nitrogen, and boron, and manganese, and calcium.

The issue careful observance of the schedule feeding cucumbers throughout the growing season, or conduct comprehensive emergency feeding (preferably in chelated form).

Wilting, curling at the edges and blanching the leaves are often indicative of cucumber root rot. This disease develops as a consequence of drying and moistening of the root system due to improper farming practices, as well as due to insufficient disinfection of the soil before planting seedlings. The underground part of the plant weakens and becomes vulnerable to a variety of pathogenic fungi which aggravate the situation. Disease "moves" from the bottom up, which is why in this case, the first to suffer the base of the stem and lower leaves of cucumber.

To avoid root rot, before planting need to disinfect the soil pink solution of potassium permanganate, not water the plants with cold water, do not spill and regularly ventilated greenhouse to prevent overheating air. At the first sign of illness should be treated with Trichoderma cucumbers or Trichophyton.

Blight or powdery mildew (one more common fungal diseases) are also often accompanied by desiccation and twisting edges lamina cucumbers. In the first case this feature will be added to the daytime wilting of plant tops and in the second - an expanding white coating over the entire surface of the sheet.

If you have a suspicion of a fungus, especially if the day before the weather deteriorated sharply, treat cucumbers 1% Bordeaux liquid. When visible symptoms of infection by Fusarium fungicides will help a wide range of actions, such as Previkur, Consent etc., from mildew -. Soda solution (100 g per 10 liters) or special chemicals (Novosil, Falcon, Topaz). Dead or severely damaged plants should be dug up and burned, ground disinfect Trichoderma.

Askohitoz cucumbers - is another fungal disease that is visually "starts" from the edges of the leaf blades (first all lower), which in phase fruiting time covered by light gray or yellow-brown dry sprawling spots. The agent may initially be on the infected seeds or poorly disinfected constructions greenhouses and greenhouses, so initially it is important to use certified seed each year and process steam thoroughly ground greenhouses. At the first sign of the disease should be treated cucumbers 1% Bordeaux liquid, copper sulfate (5 g 10 L of water) supplemented with urea (10 g in 10 liters water), and the stems dusted with a mixture of copper sulfate and chalk (1:1).

The frequent cause yellowing and curling leaves of cucumbers at the edges of sheet plate - ammonia burn. This occurs when a plant is introduced nepereprevshy manure or excessive amounts of ammonium nitrate.

Yield one here - to try to remove the excess from the roots fertilization and soil shed repeatedly so that excess ammonia wash.

Compliance with the simple agricultural techniques of cultivation of cucumbers - the guarantee of their well being. And if the leaves have begun to turn yellow at the edges, we hope, our stuff will help you quickly identify the cause and help the plants.

Have a look at my site - How to get rid of flies in the suburban closet: a personal experience 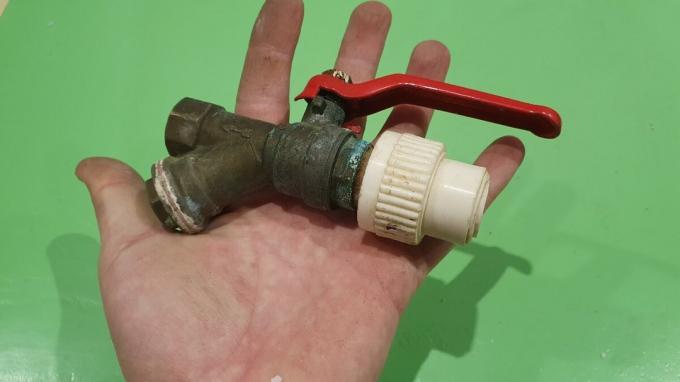 Disassembled ball valve closes in on half. I found out the cause of failure

Ball valves are installed in many homes, they have come to replace "Soviet gates":If the valves o... 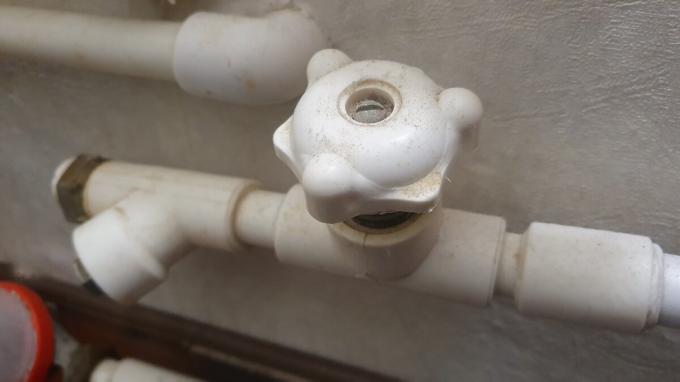 Now you will know why the leak valve and faucets. Educational program on plumbing

For a complete understanding of the causes of leaks cranes, made close-up photos. I show and expl...

Thanks to his wife had to collect a siphon which is almost does not need to be cleaned of dirt and grease. Photo report.

- "Fed up with their experiments in the kitchen, the husband of a plumber, and I sink clogged" -...